In this third article in this series we're going to have a look at BadDays NFTs, Characters and the internal marketplace.

MarvelousNFTs originally launched BadDays NFTs on the Wax chain to showoff and highlight the awesome BadDays inspired animation. Along with rewards for complete sets there was the elusive Golden Ticket hunt, with a few still to be found! Following the success of the NFT sale, the BadDays Character and Utility cards were officially unveiled.

BadDays Character (BDC) and BadDays Utility Cards (BDU) are exclusively available from baddays.io. This first wave of characters include Limited Edition Thor and Loki. Characters will become playable over a period of time. When all characters have been dropped a new series of characters will be unveiled expanding the possibilities of the BadDays Multiverse.

Jump into the internal marketplace and pick up your NFTs to start building your collection.
BadDays Character Marketplace (BDC) 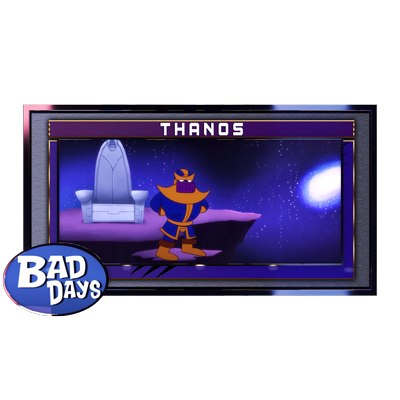 Our first exclusive Gold, Silver and Bronze Limited Editions are Thor and Loki. buying any rarity will provide some in game bonuses, we'll explore them in an upcoming article. More info:

The internal marketplace allows you to buy and sell game NFTs.  Buying multiple of the same character will allow you to fuse them to higher levels and rarities.  Check out this how to:

Assets can also be seen and managed from your wallet or an external market place. OpenSea allows you to view and trade your BadDays assets.

NFT puzzle piece hunt, staking to farming we've something fo everyone in our exciting PvP Battle economy. BadDays Utility (BDU) will be used in unison with the Liquidity pool of MNFT token upon launch for an in game staking pool. More info: BadDays: The Game

Our first Wax collections are still available however the set owner snapshot has now been taken. Don't forget there's still some exclusive Golden Tickets to find, as we approach game launch all Golden Tickets can be redeemed for exclusive in game characters.

Claims have now opened for KOGS and Yoshi Golden Tickets.

Complete Wax Set Snapshot has been taken and soon we'll have a final form for those Golden Tickets found in Wax packs, watch this space, more info coming very soon!